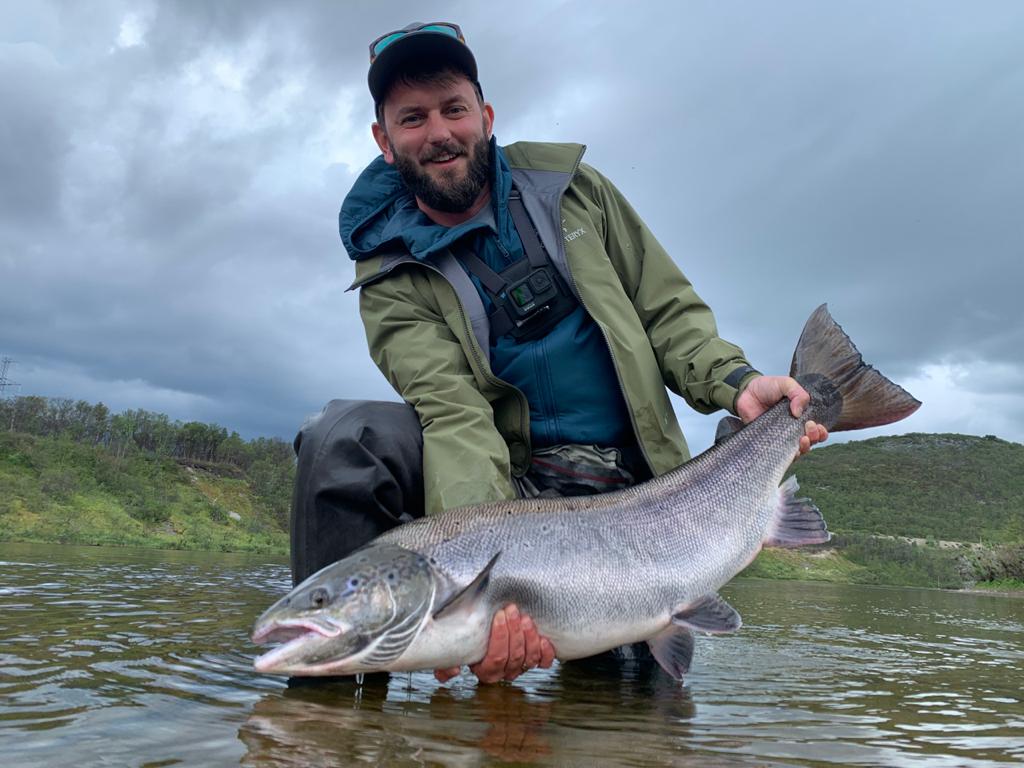 The first week of August. We gladly met Katya and Vitaly, who were fishing with us last August. This year they also arrived for three days. For the whole week Thomas from UK came to us.

After two days of rain, the weather calmed down. And pampered us with warm sunny days. The wind was nice, blowing in the southern, southeastern directions, driving a scrotum, but did not prevent make a casts. After rains, the water in Belousiha rose to June level!!!! In Voronya, slightly above average. The water temperature in the rivers is 13 and 11 degrees.

Fishing was excellent on both rivers. On Belousiha, the humpback began to shift from Salmon spots to the shallow waters, which unequivocally affected the activity of Atlantic salmon. Guests caught mainly in the upper river. Most of fish are caught on surface flies - bombers and hitches. Cascade and Red Francis also worked. Amazing fishing on the Canyon and Golden Pool and the Three Steps. Fish actively go for the flies and aggressively attack them. It is pleasing that they get caught many fresh Atlantics.

As soon as the guests caught up on Belousiha in the first days, they went for trophy fish on Voronya. Each of the guests was determined to catch a record salmon. The fish behaved actively. Vitaly and Katya on the first day lost two excellent fish on the ATR pool - the challenge was accepted! The next day they returned to the same pool. In the morning they got a grilse, but Vitaly was determined – he went out of the water only for lunch. His persistence led him to fulfill his dream of catching a record salmon - a 32-pound beautiful girl.

Thomas had slower results earlier in the week, but on Tuesday he broke his record three times in a row, catching 94,97 and 100 cm of fish within two hours. There was no limit to joy - the best fishing in his life. The next day, 97 cm of beauty managed to land again.

The week is clearly a success for everyone!!! The fish was active and rewarded the fishermen for perseverance. We are waiting for our guests next year, as well as this year again.

The week is clearly a success for everyone!!! The fish was active and rewarded the fishermen for perseverance. We are waiting for our guests next year, as well as this year again.

Record of the week: 90 cm Atlantic salmon, caught by a single hand rod # 8 class on the Bomber fly on the Belousiha River.

105 cm Atlantic salmon caught by a class # 9 doublehand rod on a Vitaly's Red Frances fly on the Voronya River. 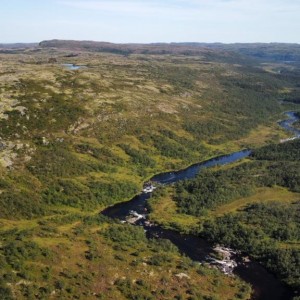 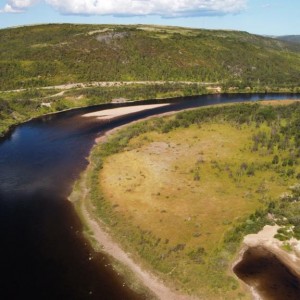 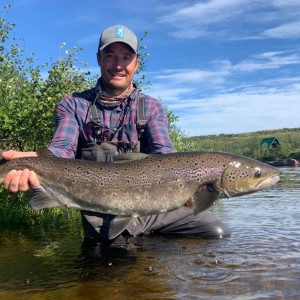 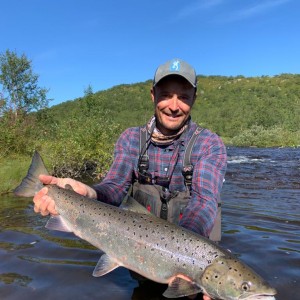 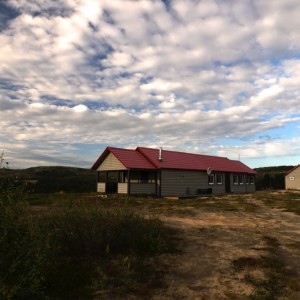 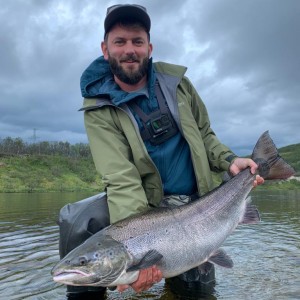 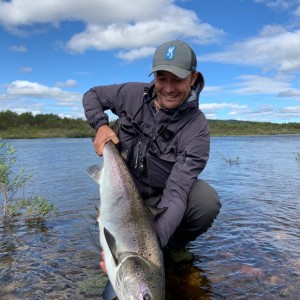 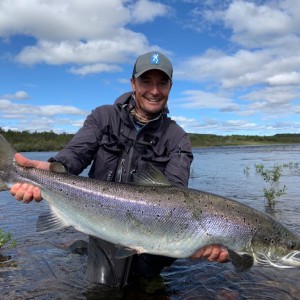 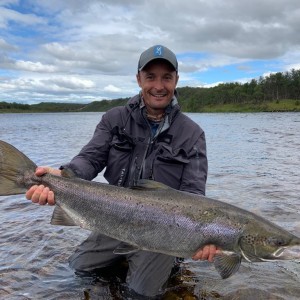 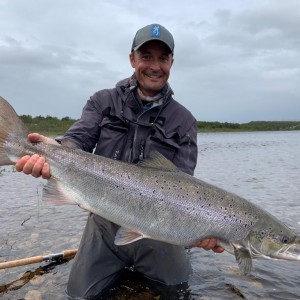 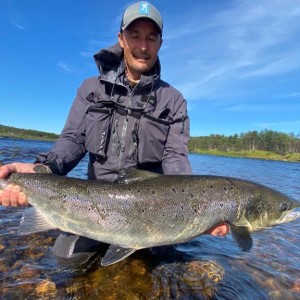 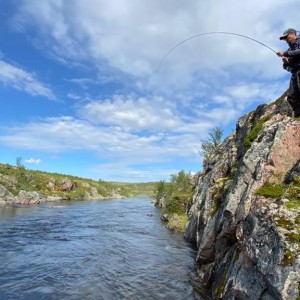 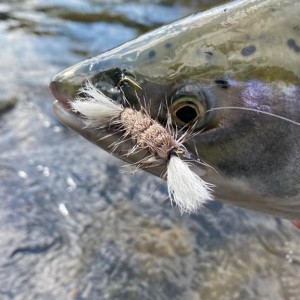 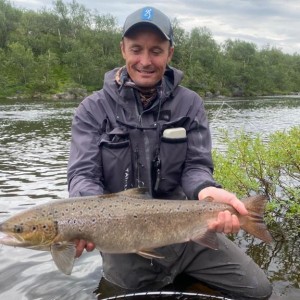 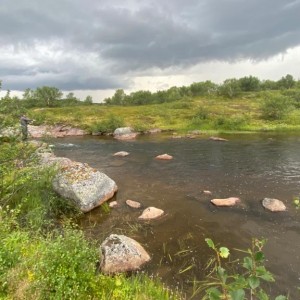 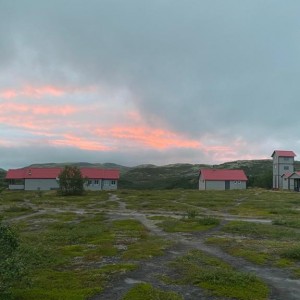 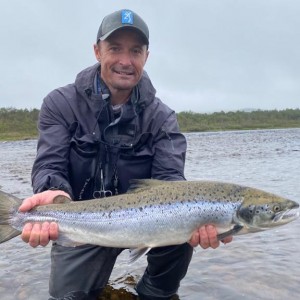 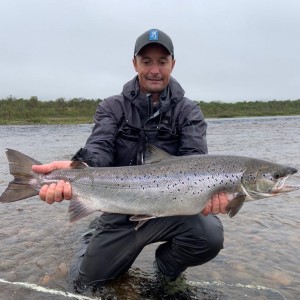