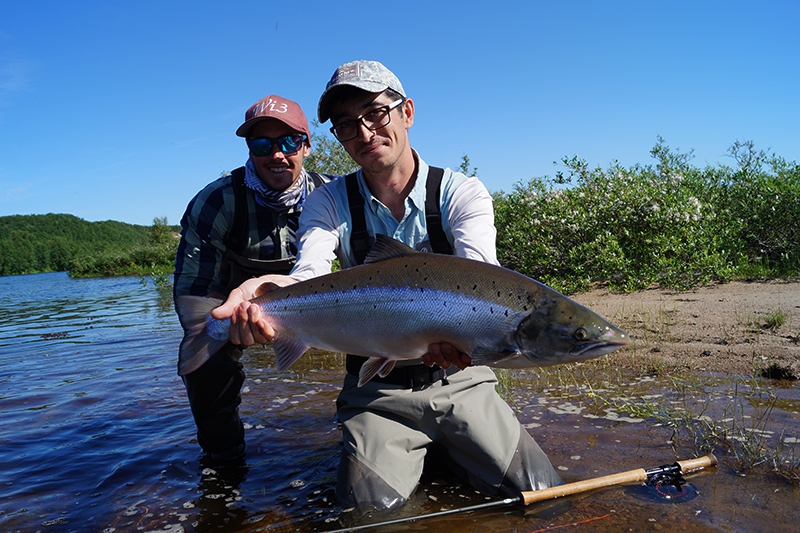 There came the fifth fishing week on the rivers Belousiha and Voronya. The camp welcomed the southern guests from Krasnodar Krai Evgeny and Alexey - friends of Dmitry Drozdov and Ilya Puryshev who with them also came to make the next movie about fly fishing. One day later Alexander from Saint-Petersburg first time arrived to conquer the northern rivers.

The first three days over the tundra hung the heavy cumulus and cumulonimbus clouds which were not passing an even one gleam of the sun, wind blew only from the North, the weak rain sometimes drizzled. But in one night everything sharply changed, air rushed warm from the South, the sun inevitably fried, temperature rose to 26 degrees. Water level fell in the river Belousiha to an average mark, and temperature rose about 16 degrees that obviously did not please fishermen. Level in the river Voronya still jumped, but did not go beyond critical marks - for fishing the fact that it is necessary – water is not much not less. River got warm by a weekend to 14 degrees.

Alexander began fly fishing several years ago, and for big fish went to fishing with fly rod for the first time. Together with head guide Maryano the first days besides casting they also trained the ability of landing of salmon and at last after several losts progress appeared! Secon half of the week alexander without labour and advice started landing the salmon only once used help of Maryano when he landed 7 kilo fish on Glinka. Alexander liked originality of the river Belousiha, and especially rapids Three Steps where he grounded the most part of fish. Also good luck smiled him on Crazy Turtle pool. The first salmon flies that became his favorite are Stoat Tail, Ally's Shrimp. To the week end Alexander caught 8 Atlantic salmon: 5 grilses, 2 salmon of 65 - 75 cm, and last male of 86 cm.

Dima and Ilya flaunt before lenses of television cameras again, day after day landing new salmon. Within a week they paid attention to both rivers equally, having caught in the general result of 22 salmon. The most part of fish was landed by TV broadcasters from the runs of the lower part of the riverBelousiha and from the Beach on the river Voronya. Dima as usual generally caught on the flies tied according to the recipes of him which show the efficiency on our rivers not first year. Ilya submitted both rivers with Temple Dog and Karelochka flies on the line. During the week they landed 8 grilses, 6 salmon the sizes 65 - 75 cm, 5 fish of 75 - 85 cm and 4 to 92 cm.

Lyosha visited already many rivers of the Kola Peninsula, including Belousiha and Voronya. He devoted the first half of week to fishing on the pools of the small river which are fallen in love already to him, exactly rapids and slow runs of the top bits. Fishing of Alexey always properly quietly and with arrangement - for several days he landed 9 salmon, the largest of whom was 86 cm. Cascade was a favorite fly. The finishing fishing days after a two-day outdoor recreation without rod the Krasnodar fisherman chasing the silver on the bigger river where he on the Beach landed one more salmon - 92 cm on Cascade tied on a hook of the sixth size.

Zhenya was not lucky on the river Belousiha where he lost two fish, but on the river Voronya his fishing was good! In four days two grilses, three salmon more than 80 cm and couple are landed by the sizes 92 and 100 cm. The salmon on the Beach and Twins run are parked on the flies Snelda and Cascade.

Week was quite productive. Though fishing went steadily not at all, everyone could catch a trophy. And someone will also show it to us on screens of television receivers. We look forward to the next tv shows and above all our awesome guests in the next seasons!

100 cm Atlantic salmon caught on a double-handed rod #7 on the fly Snelda. 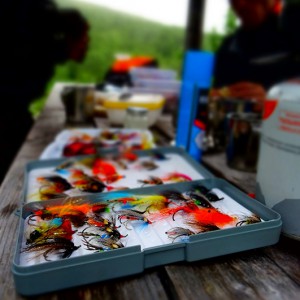 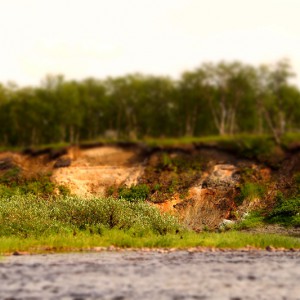 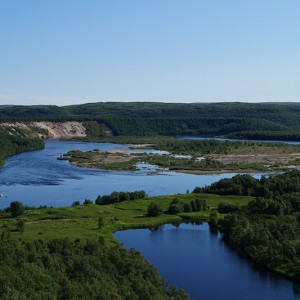 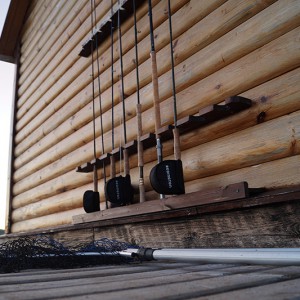 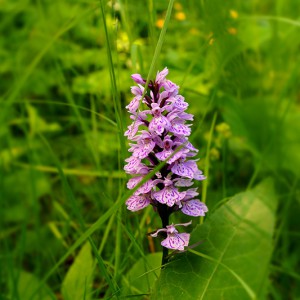 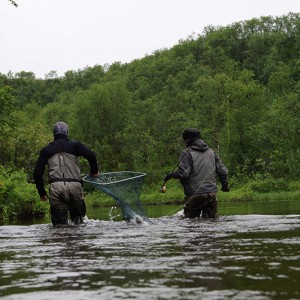 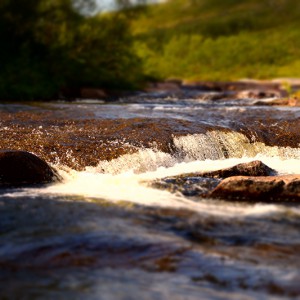 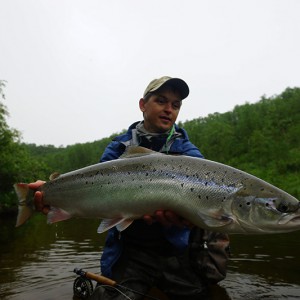 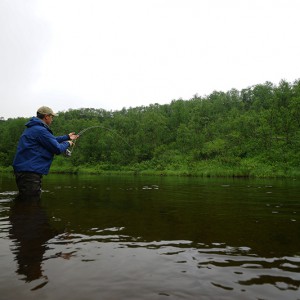 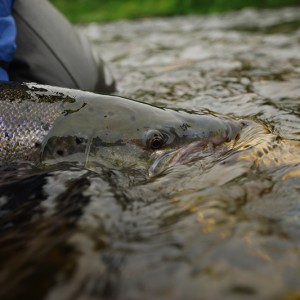 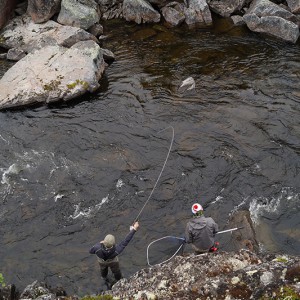 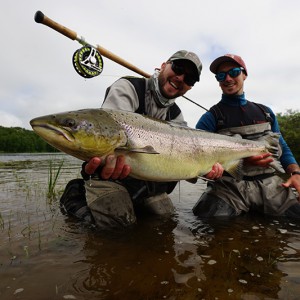 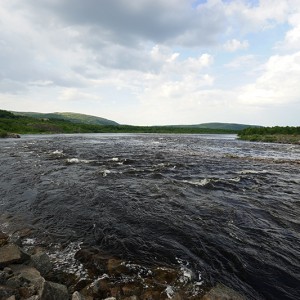 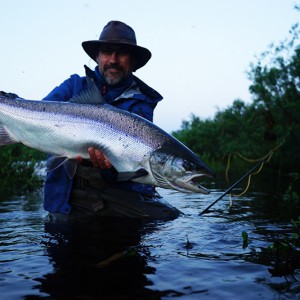 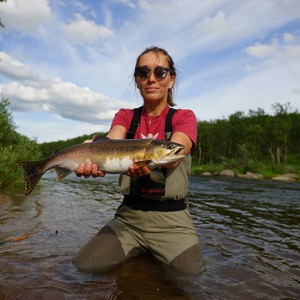 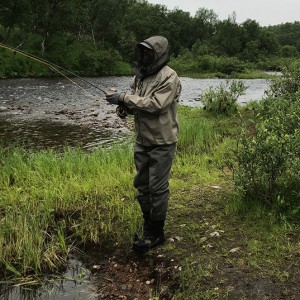 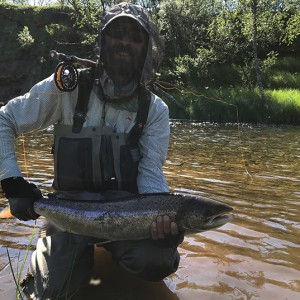 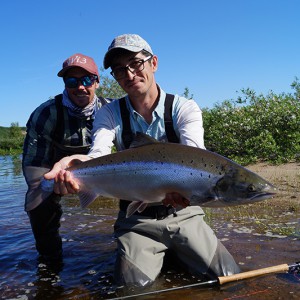