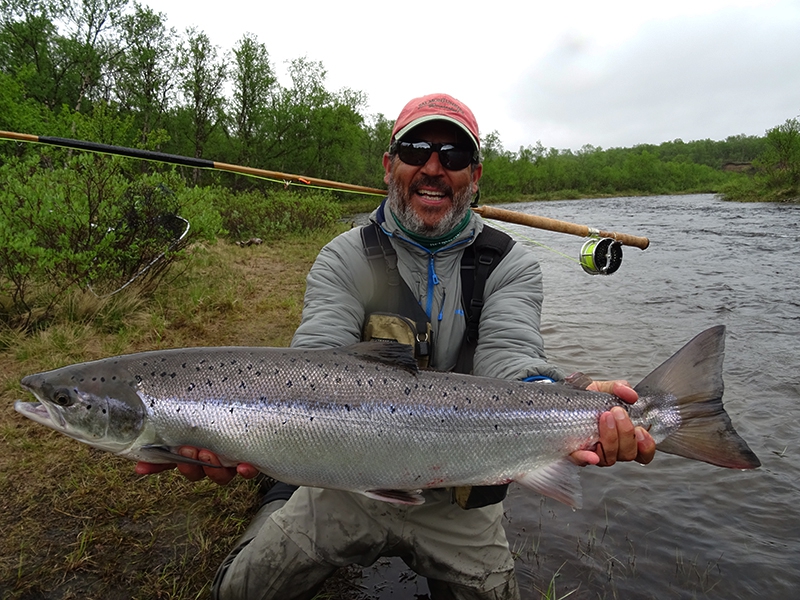 On the first of July the Belousikha River welcomed six guests from Europe. Two Italians, Giovanni and Andrea, three Danes,  Morten, Peter and Leszo and Icelander Magnus. Giovanni and Morten were camp guests last season and looked forward to the next morning with anticipation, showing off their portraits with previous results hanging on the walls of the lodge, from last year epic adventure, in front of their fellow guests.

Contrary to cold June, July from the first days pleased us with warm sunny days. The air temperature varied between 17 - 26 degrees in the afternoon. The winds blew from the south, west and east. The water warmed up quickly, in a few days from 9 to 13 degrees. The river was continuously dropping, the rapids calmed down, the level gradually reach to the middle point. Trees, grass, flowers, everything took on a bright color. Particularly interesting for the wonderful changes was the observant agronomist Andrea,  for whom the nature of the north was very impressive, and his erudition, despite the distance of 4,500 km from Italy, amazed the camp staff

The first day, after breaking into teams  and knowing  their guides, the fishermen went to the river.

Magnus and Morten landed two salmon 70,74,79 and 74 cm on the Glinka one, flies Belousiha special and hitch. Having risen a couple of hundred meters up to the Birch pool, Magnus, on the Belousiha special, a fly he tied and used at various venues without interest, but which Belousiha silver found irresistible… takes out another 83 cm salmon.

Meanwhile, Peter on the hard-to-reach river channels from the Estuary beat drags 69 cm of salmon to the Black & Pink flies.

Giovanni and Andrea landed on the fish in the lower parts of the river. Salmon 65 and 69 cm attacked his favourite “Monkey” tubes.

Giovanni and Andrea caught two fish on the second bit. Excellent fishing on the rapids. One 65-cm salmon is grounded from a small pit in the middle of the cascade to the Cascade. The rest baked on the

top step, which is famous for its activity at the beginning of the season with large and medium water. Two 80 cm and one 75 cm salmon are caught on Cascade and Casmonkey flies.

The third day. Morten and Magnus get out of three Steps 65 and 77 cm salmon. Flies Monkey and Sunray Shadow.

Giovanni, annoyed at his losing fish, rejoiced with his childhood friend Andrea, who successfully landed two salmons on First Glinka for a fly very reminiscent of the famous Editor, but connected somewhat differently.

Day four. Lasse and Peter caught on the fish on the second beat. On the Three Steps of 79 cm Salmon attacked the Silver Doctor. At the First threshold, a female was hunted down 62 cm to a pipe unknown to us.

Giovanni again does not carry with the landing - after running a few minutes on the Flushing pits, both fish leave the hook without approaching the net. But in the end, Casmonkey clings to 50 cm grills.

Day five. Giovanni on Three Stairs lands three salmons 55, 65, 75 cm. All on Casmonkey and Red Frances. Andrea in the same place on Black & Orange gets 75 females.

Leszo parked three fishes on the First Glinka 57, 61, 60 cm on the Monkey. Peter on her own

With the help of Red Butt and Zonker puts in the net three more fish: 62, 77, 85 cm. During fishing breaks on Glinka, Birch Pool gave another salmon 61 cm, again Red Butt.

Morten on Casmonkey landed 50 cm of grills on the Flushing Pits.

The Lesson from the Aquarium takes out 65 cm of salmon for Monkey. Peter parked two 45 cm grills on Second Glinka and Rinsing Pits, as well as 63 and 78 cm of older salmon in the area of ​​the lower corners. All again on the tube Monkey.

A difficult day was for Giovanni and Andrea. Landed since the morning 78 cm of salmon on the skater, the whole day there were only gatherings and pokes. But what end of the fishing week can be ideal if not this? The last cast on the Birch bullet, Frasers Shrimp, laid in exactly the same pit from where the morning salmon landed, gives us an excellent fighter. 10 minutes of struggle, which appeared more than once backing, squealing coils and anxious silence, constantly loud and positive Giovanni created a rather tense atmosphere. Plans for landing of this guy changed more than once, but nevertheless compromise has been reached and the giant has appeared in a net. The measuring roulette has shown exactly 100 cm. It is time to update photos on a wall of Lodge, Giovanni!!!!!The river had the last laugh. But the river, and Giovanni,  both know they will meet again.

Week was productive! In spite of the fact that fishers also went to the river Voronya which, unfortunately because of weather conditions wasn't available to fishing, they have derived not smaller pleasure from fishing on the Belousiha River. Belousiha which had to be answerable for  two has presented a set of worthy trophies, beautiful photos and bright impressions.

Hooked but not landed: 42 Atlantic Salmon. 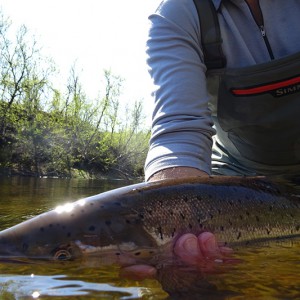 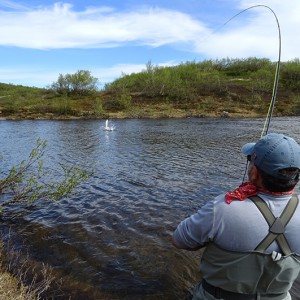 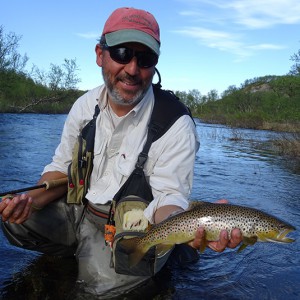 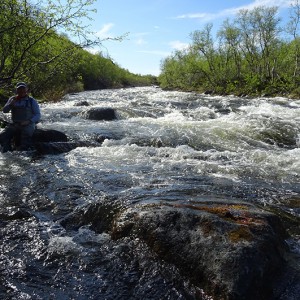 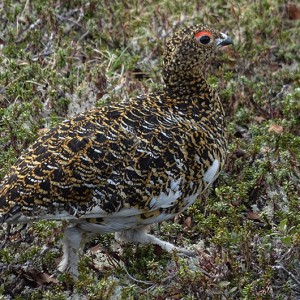 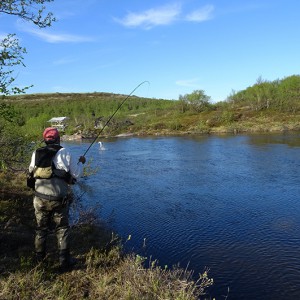 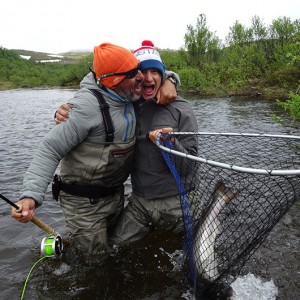 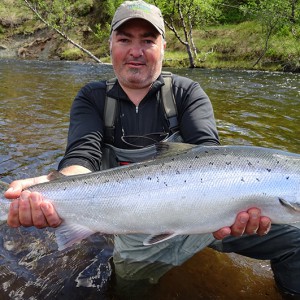 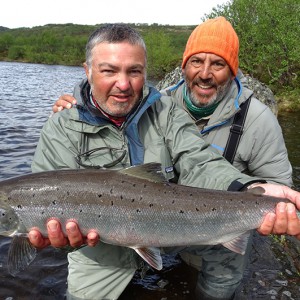 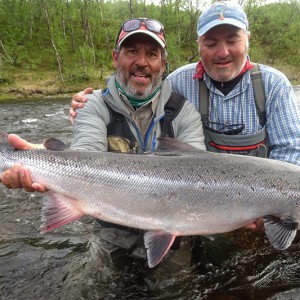 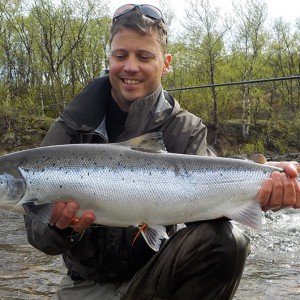 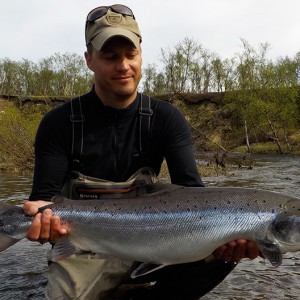 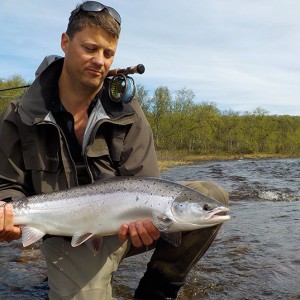 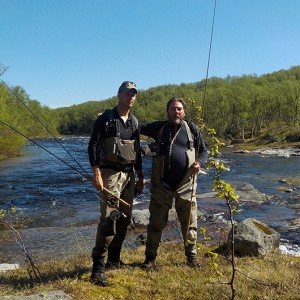 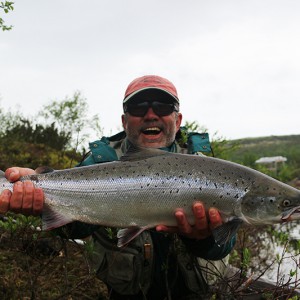 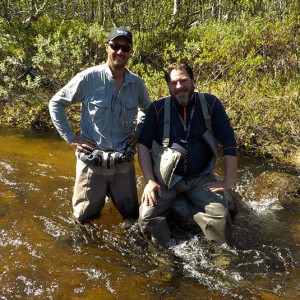 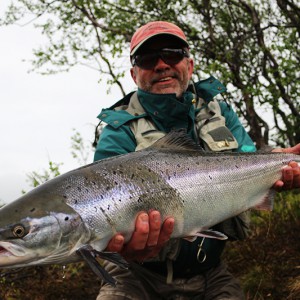 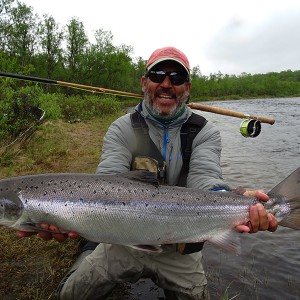