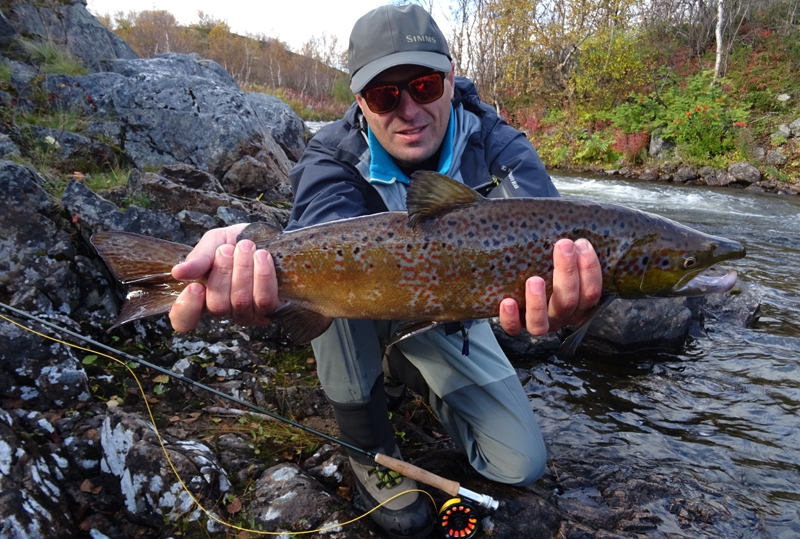 In the first week of autumn on Belousiha base in search of sea trout came Dmitry Drozdov. This time he came not alone, with a friend of Andrey. The weather was autumn, far from being an Indian summer. The cloudless nights the northern lights have concealed under their peals of most of the heavenly expanse. Most birch trees already bared, but pleasing to the eye, as if covered with flame rowan. The temperature usually does not rise above 12 degrees, but one day was warm - 17 and south wind. Often rains came, which significantly raised the water level - 10 cm, similar to the July - meaning that several pools inhabited again, and within a week the fishermen confirmed this.

The first day. Dmitri and Andrei went to fish beat 4. Everyone has their own priorities: Dmitry hunted for sea trout, Andrew was interested in all mixed bag. On the "stone sack" Dmitry’s  various nymphs landed three salmon of 60, 55 and 65 cm, and a sea trout, as Andrew struggled with BBC Trout fly optimist.

Second day. Our ranks are joined two other fishermen: Victor and Maxim. Maxim went to the River Voronya, where he landed two salmon of 67 and 95 cm and a good sea trout. All caught on "The Beach", working the pattern “Snelda”.  Victor ‘s results were similar, fishing the Belousiha.  On the pool "Obkom" he caught a salmon of 69 cm and a small sea trout. Relocating to Fedorovskiy  stream he landed another salmon of 72 cm. All fish caught on “Mudler Minnow”.

Day Three. Andrew gets into some good action fishing on "Crazy swim"  where he landed three salmon of 60,59 and 61 cm on the pattern “Beaver”.  And these three salmon were the first ever caught by Andrew.  Dmitry continued to hunt for sea trout and went to the “Flushing pools” close to the camp. Here he did find sea trout, although on his return, fishing “home pool” he took a 60 cm salmon, and then took a further two  of 61 and 62 cm from “Glinka I”. Again nymphs focused on catching trout were responsible.

Day four. Andrei , fishing the pattern “Beaver” on three steps enjoyed a 60 cm salmon. Further roaming produced a further three good sea trout - Dima still working the nymphs, continues to attract not only the Trout -from the "Obkom" salmon of 55 cm, "First Glinka" 60 cm and on the "stone sack" 61 cm. Showing his intimate knowledge of the river to the max.

Day Five. We have a new guest - a Muscovite ,Oleg. He arrived for the final day, which meant he would not get to see all of the Belousiha. However, the river often rewards newcomers. And for Oleg, the river dug deep. The first ever salmon in his life was a belter of 95cm landed on the pattern “Cascade”.  The fight lasted for about twenty minutes, although the thrill of the previously unexperienced fishing will of course stick for life. Boosted from the experience, Oleg went on to land further fish with 65 and 57 cm salmon. These fell to the pattern “Red Frances” and were hooked in “Slow pool”.  Meanwhile, Dmitry on the "stone sack" , still persuing sea trout with nymphs, lands two more salmon, 72 and 73 cm, in addition to three sea trout.

Week was interesting and fun. The intimate knowledge that Dimitry has of the river really shining through in the results. And two previous Salmon virgins, experiencing what it is that keeps salmon anglers returning to the Belousiha river lodge. 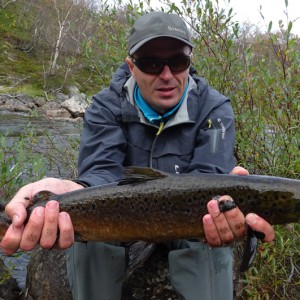 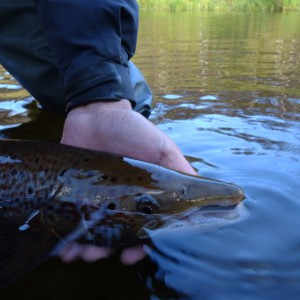 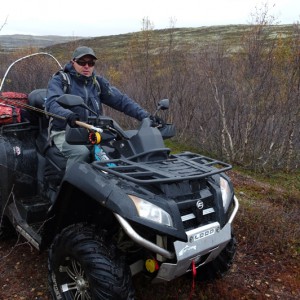 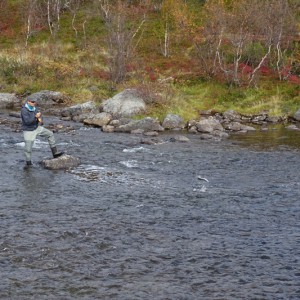 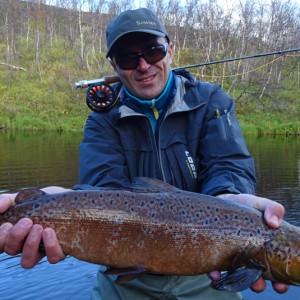 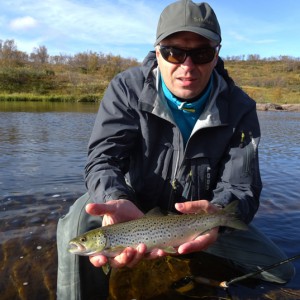 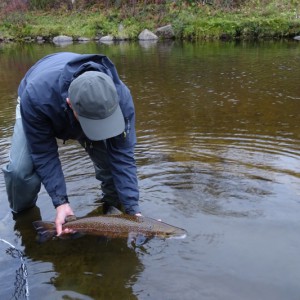 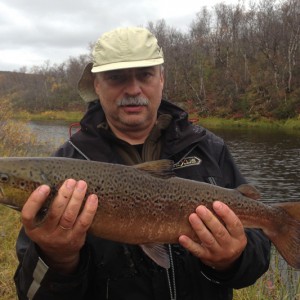 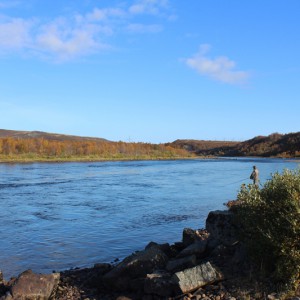 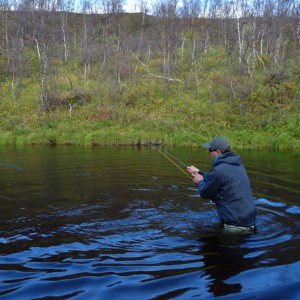 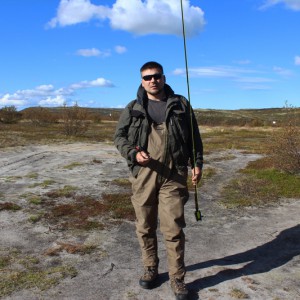 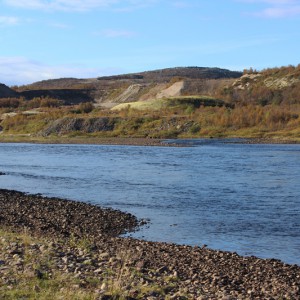 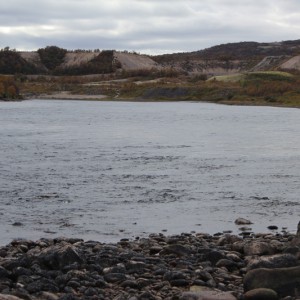 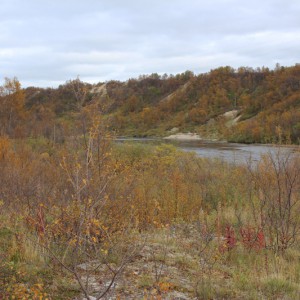 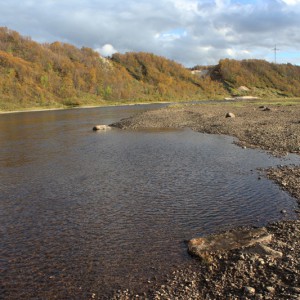 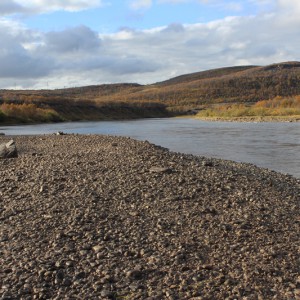 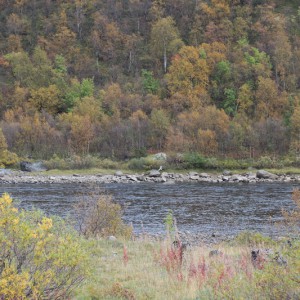 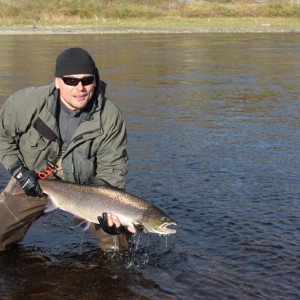 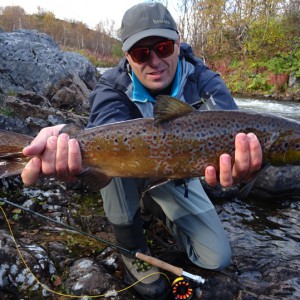