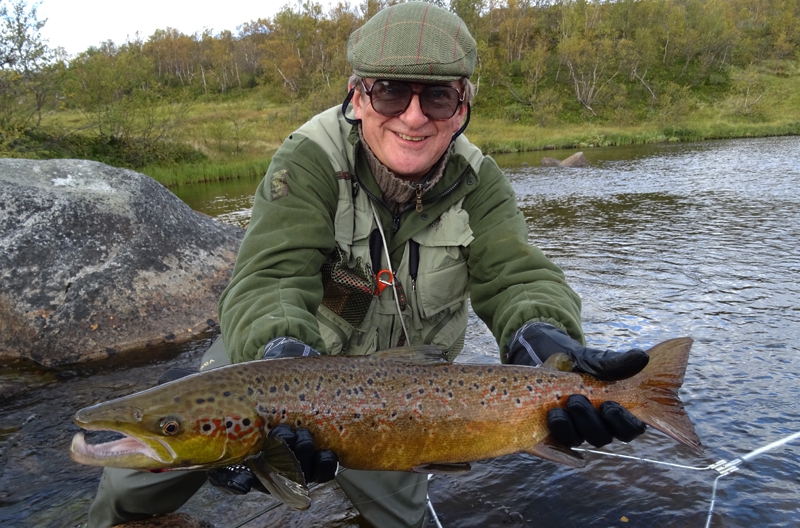 In late August, the river Belousiha received guests from England: the two Johns, Steve and Tony. The weather was changeable: the wind constantly switching directions, with frequent rain, and chilly drizzle.  The sun mostly hid itself, just one day warm and bright rays. Water temperature ranged from 9 to 11 degrees. The rains raised the level of the river by a few centimetres.

Divided into two teams, we went to different parts of the river. Tony and Steve moved up to look at the canyon on beat 1 to check the pools below it. During the entire day just five medium-sized brown trout were caught. But team 2 did very well indeed from beat 4. Two salmon of 60 and 62 cm on the Red Butt from the pool "Stone sack" and no less than seven fish of 68, 67, 64, 65, 78, 60, and 61 cm was landed from the Aquarium. All caught on Cascade and Red Butt.

On the second day the fishermen swapped. Encouraged by the results of Johns, Steve and Tony went to the Aquarium. Luck once again turned away from them, but continued to pursue Mr. Cavendish and Mr. Cremer.  In  pool "2 stones" they landed a 78 cm salmon. After a few hours on "Swedish table" eventually a 60 cm salmon was induced to take.  After lunch at the "Golden pool"  four salmon of 64, 68, 67, and 62 cm were landed. Successful patterns were  “Cascades” and Frances.

The third day brought another 5 fish. Finally Stephen caught - he landed from “aquarium” a 68 cm salmon, Anthony also landed his first two Atlantic salmon  of 62 cm and 60cm. John Cremer continued to stack up the fish tally. On “Crazy Pool” he landed a 70 cm salmon. All fish caught were hooked again on the Cascade. Meanwhile, up on "Three steps" on beat 2, John Cavendish managed a grilse of 55 cm, on the fly Ally's Shrimp.

Fourth day. On the "stone sack" in the morning, John Cremer, after  an epic battle lasting twenty minutes, the landing net was slipped under a huge male fish of 105 cm - the record of the season! And from such a small river, the joy for John was easily seen from the size of his smile. It is reported that this smile is still on his face, back in the UK. In the next hour, three more salmon of 67, 62, and 65 cm he landed, from the same pool. All on the same cascade and Frances, size 8. Plus a bonus sea trout of half a kilogram. Judging by the colour, the trout had been in the river no more than one day. Mr. Cavendish landed two males of 63 and 70 cm in the "Aquarium". Again,  Cascade and Red Frances being responsible for the salmons mistakes. In the evening, Anthony caught a good sea trout on Stoat Tail from "Three steps" .

Fifth day. John Cremer was back in the thick of the action, with two fish 68 and 65 cm from pool Aquarium on the fly “Cascade”. Anthony landed a 64 cm male to the "stone bag" on a Muddler minnow no less. Finally, a new fly!

The final day brought the least fish from this week. John Cremer landed a 45 cm sea trout on the "two stones", to the Cascade fly, then took his final fish of his amazingly productive week, a 65 cm Salmon from  "Slow Pool", on the fly Red Frances. Tony on the "stone sack" took a 64 cm male. Fly Ally's Shrimp.

The last week of the summer was stunningly productive. John Cremer, Stephen and Tony have reached their goal – all were Atlantic salmon virgins before this trip. John also broke three records for the season.  Seven fish in one day, sixteen fish in one week and the biggest salmon of the year. 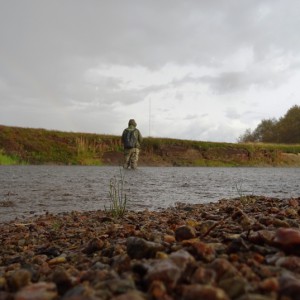 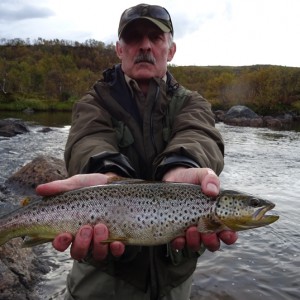 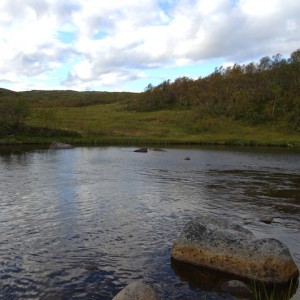 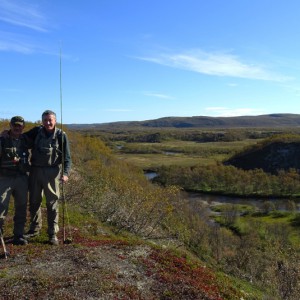 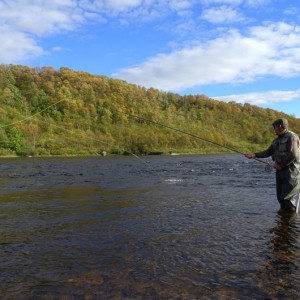 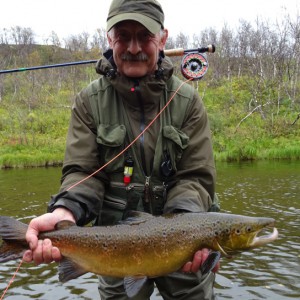 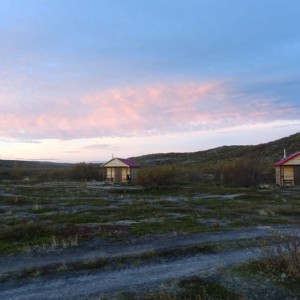 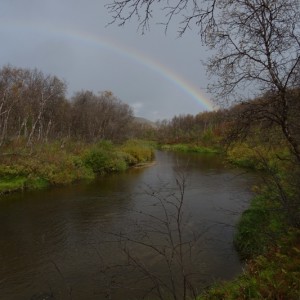 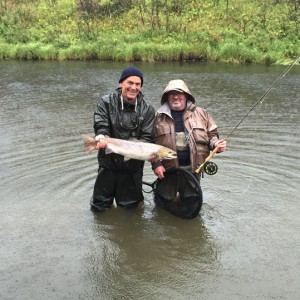 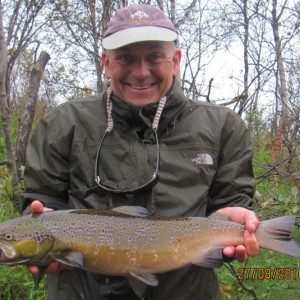 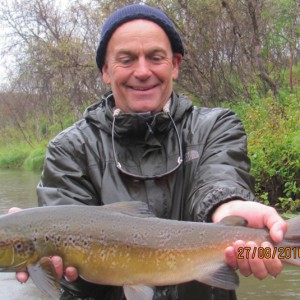 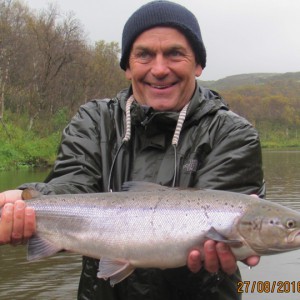 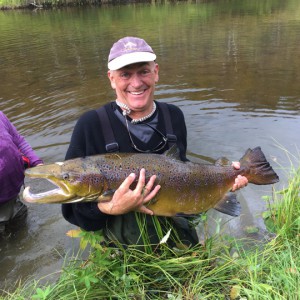 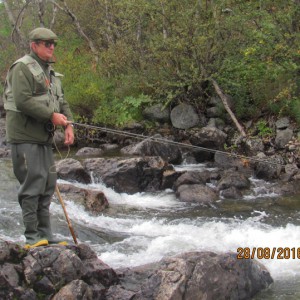 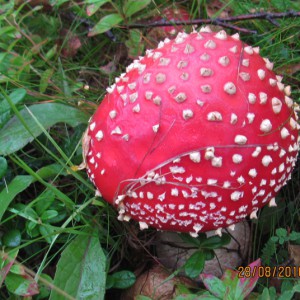 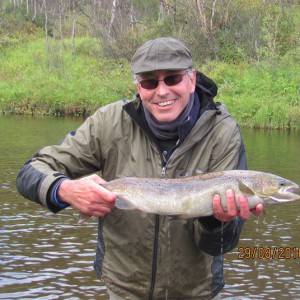 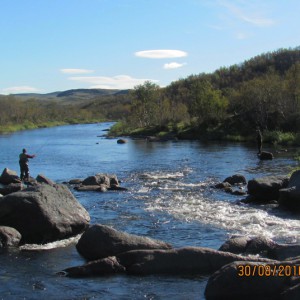 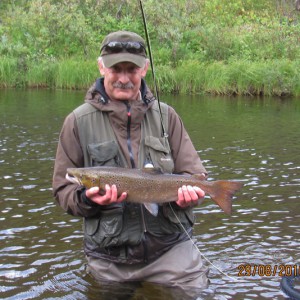 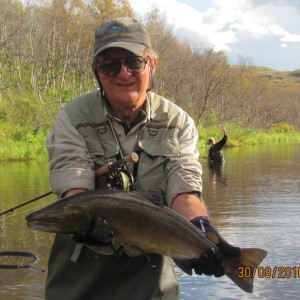 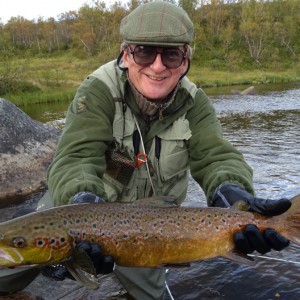